Getting started with the Vectorworks SDK, Part 2

Following on our last instalment, we’ll review the basic Vectorworks plug-in types, and then break down the architecture of our custom text note plug-in.

Regarding plug-ins in general, which you can mostly skip if you know anything at all about Vectorscript development

At application startup, Vectorworks will scan a few directories looking for custom code, namely /Applications/Vectorworks 2011/Plug-ins and ~/Applications/Library Support/Vectorworks/2011.noindex/Plug-ins. If it’s in the right format, it’ll automatically load it and make it available for use in drawings. Much of the core program function is implemented using plug-ins. Most plug-ins will have to be added to a workspace, so that it can be accessed through the UI.

There are 4 generic types of plug-in. Think of them as nouns and verbs. Parametric objects are the nouns. Menu commands, tools, and VectorScript libraries are the verbs.

Parametric Objects are graphical objects that exist in the 3D space of the drawing. They can control their own appearance based on user-supplied parameters and some awareness of their context, eg. the drawing scale. They can be relatively simple, like the Break Line, or horrendously complicated, like the Nemetschek-supplied Door, Window, Space and Stair objects.

Unlike VectorScript, the SDK requires you to provide a corresponding Menu or Tool to actually place the Parametric Object in a drawing. This is usually an advantage.

The Parametric Object is sub-typed by its characteristic geometry into Point, Linear, Rectangular, 2D Path and 3D Path Objects. This will mainly define how many draggable control points it has.

The black art of good parametric object design starts in wedging your particular concept into one of these subtypes, based on whether a given parameter ought to be edited graphically or numerically. Much of this guidance is going to come from industry experience. A door, for example, is better defined as a Point object with its width set from a list of valid widths, since door widths tend to come in a continuous range of sizes. A window, on the other hand, is usually built to fit, so it’s better that it be a Linear or 2D Path object that can be edited graphically. It would be nice if there were hard-and-fast rules, but then it wouldn’t be an art. So it goes.

Menu commands and Tools are used to provide a user interface to your custom functionality. In general, the choice between them requires a judgment call based on their UI:

Examples of Menu-type plug-ins would be ones for generating reports or grouping pre-selected objects. As you should expect from the names, Menu commands will be accessed from the menu bar, and Tools will be accessed from the tool palettes. There aren’t hard-and-fast rules here either; many plug-ins could go either way. It sounds a bit dumb, but one of my rules when I’m in doubt is: if I can’t come up with a good icon, it’s probably a Menu.

VectorScript libraries are used to provide new functions within VectorScript. They aren’t expressed within the graphical UI; ie. you can’t put them in a workspace. I find it comforting to know these exist: I can use them to drop down to C++ within an existing VectorScript plug-in to gain capabilities that aren’t present in VectorScript, but without necessarily having to rewrite the entire plug-in using the SDK. But, since that’s about all I know about them, I won’t touch on them further in this tutorial.

Plug-ins are packaged as bundles on Mac OS X, with the extension .vwlibrary. Our finished plug-in—and with rare exceptions all modern plug-ins—will have a directory structure like this:

This structure will be produced automatically as part of Xcode’s build process.

(If you see a .vwobject or .vwplugin bundle, you’re probably looking at an old-style plug-in that contains only a Parametric without its corresponding Menu or Tool. My preference is to put all related Parametrics, Menus and Tools in the same .vwlibrary. As the VCOM system takes hold, I expect you’ll start seeing only .vwlibrary bundles).

The anatomy of our text note plug-in

Our text note plug-in will provide both a Parametric object, and a Tool to place it. We will break it down into 6 classes and 5 files. 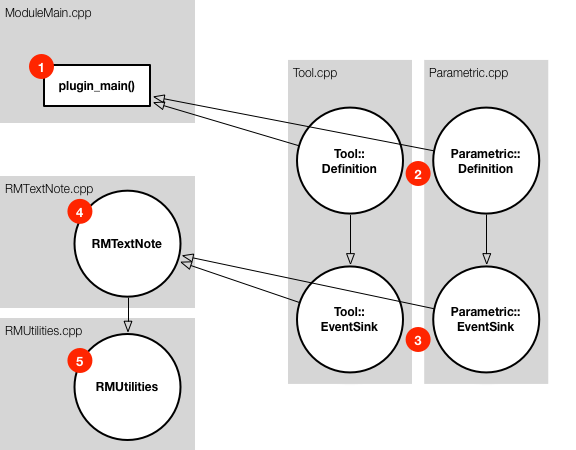 Note that instantiating and destroying objects from most of these classes will be handled automatically by Vectorworks. The only one whose life cycle we’ll have to manage is the RMTextNote, which will exist on the heap.

We’ll define 8 parameters for our text note. (Note that Vectorworks will automatically add Rotation to any Parametric). Some of these will be hidden or deactivated in relation to others. 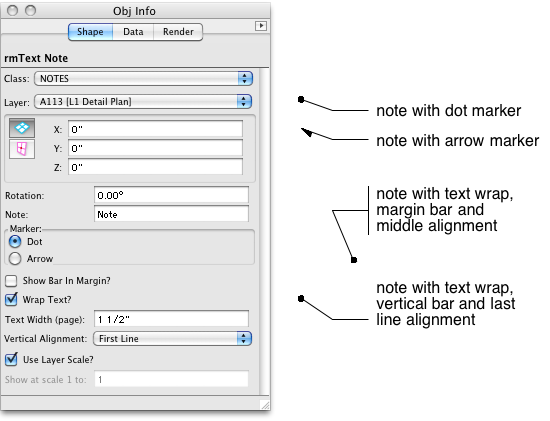 We’ll set the font and size to 8pt Helvetica initially, then allow it to be adjusted after placement from the Text menu like any piece of placed text. This capability is available automatically to any Parametric, provided it has been enabled, so we won’t need parameters for Font and Size.

(I also recommend adding a hidden integer Version parameter at the outset. We won’t use it in this tutorial, but it comes in handy as production plug-ins evolve).

In Part 3, we’ll get our development environment set up, and in Part 4 we’ll create a skeleton plug-in from which we’ll gradually hang working code.